I finally have a boxed set! 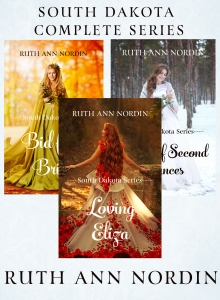 While other authors have been doing this for years, I just now finally got on board and did the first one. I’ll be slowly working on others as I go along. Anyway, the benefit to the boxed set is that you get the entire series in one book.

I gave new covers to Loving Eliza, Bid for a Bride, and Bride of Second Chances. These are older books, and they are in the South Dakota Series. Here are the descriptions for each book:

Eliza left her life of prostitution to become something she could never be back in Omaha: a lady. Her plan is to remain single for the rest of her life, but when she arrives in South Dakota, she runs into John Evans. And he’s not about to let her remain single if he has anything to do about it.

As soon as John sees Eliza, he falls in love with her. Not only is Eliza the most beautiful young lady he’s ever seen, but she isn’t put off by the fact that he’s mute. Since his mail-order bride didn’t come, he sees no reason why he can’t marry Eliza and make a home with her.

Eliza, however, knows very well why they can’t be together. She used to be a prostitute. John is a sweet man who’s never even kissed a woman. He deserves a virgin who can give him her innocence and a future with children. Eliza can do neither one for him. But while she insists he should wait to see if his mail-order bride is coming after all, she is taken in with his sweetness and charm. And soon, she’s torn between doing what is best for him and what her selfish heart wants.

Bid for a Bride

After Loving Eliza, John and Eliza adopt a blind boy named Brian who was abandoned by his father. Bid for a Bride is Brian’s romance. The story begins in the quiet South Dakota town where Brian lives.

Lucy finds out the man she just married already has a wife, and what’s worse is that he’s trying to sell her to the highest bidder. The preacher intervenes and helps her annul her marriage, but he’s aware that Lucy’s week with her bigamist husband might have resulted in a pregnancy. To protect her reputation, he asks Brian Evans to marry her. Brian jumps at the chance and proposes to her. Seeing no other option, Lucy agrees. But will Brian have the marriage based on love that he longs for or will he always be Lucy’s convenient husband?

Jeremy Graham made a promise to Rebecca, his wife, that he would never love another woman. After Rebecca’s untimely death, her sister, Jane Syas, is about to be sold into marriage to a disgusting older man who only wants her to warm his bed and to do the chores around his house. Jeremy can’t bring himself to stand idly by while her brother makes such an arrangement. Not only does he feel duty-bound to protect Rebecca’s younger sister, but Jane’s always been a friend in whom he could confide in. So he steps in to give her his name and his home, with the understanding that this is only a marriage of convenience. Love will never factor into the equation.

Jane, who has always been shy and content to hide in the shadows, begins to stir up old feelings in him—feelings for which Jeremy isn’t prepared to feel again. And before long, he feels torn between holding onto the love he had for Rebecca and letting Rebecca go so that he can, once again, look forward to the future. With Jane, the future that spans before him could be wonderful, but he has to have the courage to take it. Does he dare do that? Or would he be betraying Rebecca?

(Jeremy is Eliza’s son that she had to give up for adoption. The two will reunite in this book.)

If you want to read Loving Eliza first to see if the boxed set interests you, it is currently free.

I also have a new Regency book out!

This is Book 3 in the Marriage by Fate Series.

Here are the books in this series so far:

Lord Whitney is intelligent, rich, and good looking. But he’s also boring. Despite his notable attributes, he has nothing worthwhile to contribute to the gentlemen he would love to establish friendships with.  One thing he’s noticed is that all the gentlemen around him are getting married.  So in order to have something in common with them, he does something he never thought he’d do: he lies about being betrothed.

His ploy works.  For the first time in his life, gentlemen are finally paying attention to him.  Soon, however, they start asking him questions about the wonderful lady he’s going to marry.  It comes to a point where he can no longer keep up the lie.  He has to find a lady to present to them.

As fate would have it, Lady Stacey happens to be in the right place at the right time, and he manages to convince her to play along with his scheme.  In return for playing the part of his betrothed, he will secure safe passage for her and her mother out of London. But as time passes on, he begins to wonder if there’s more to their ruse than meets the eye.  Will their deception bloom into a love that is real, or will it be as make believe as it was when they met?

If interested, you can find it at these retailers:

The Marriage Contract will be out on April 21! 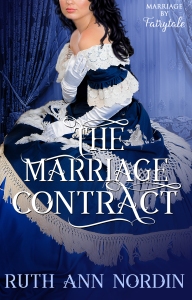 This is the first book in a brand new series. It is loosely based off of the “Beauty and the Beast” fairytale.  This is one I’ve been wanting to do for years, so I’m glad I finally got around to writing it. I’ll mention more about this next month.

Since this post is pretty long, I’ll get to more of what I’m doing next month.

I hope everyone has a great April!

Ruth Ann Nordin mainly writes historical western romances and Regencies. From time to time, she branches out to contemporaries romances and other genres (such as science fiction thrillers). For more information, please go to www.ruthannnordin.com or check out http://ruthannnordinauthorblog.wordpress.com.
View all posts by Ruth Ann Nordin →
This entry was posted in Uncategorized and tagged bid for a bride, bride of second chances, loving eliza, make believe bride, the marriage contract. Bookmark the permalink.
%d bloggers like this: