If It Takes A Scandal (Marriage by Bargain: Book 4) is now available!

I’m happy to say that the Marriage by Bargain Series is now complete.  So if you like to wait until the whole series is done before you start reading it, here’s a list of the books in this series for easy reference:

Since this is going to be a long post, I’m just going to give the quick description:

Two people who don’t want to get married end up having to when a third party gets them ensnared in a scandal. A year later, both have to come to grips with the reality of their very inconvenient marriage.

Here’s where you can find it:

One of my beta readers had pointed out that since Jason and Anna (the heroine’s friends in If It Takes A Scandal) are featured in Her Counterfeit Husband, that I should let others know.  So, in case, anyone hasn’t read Anna and Jason’s story but would like to, here’s the information for that book… 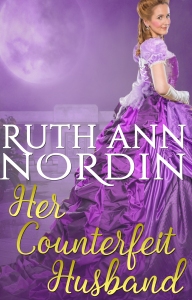 A conspiring duchess. An amnesiac doppelgänger. Can hearts be true in the midst of double deception?

Anna feels little anguish when she sees the dead body of her husband. The young widow has no plans to mourn over the cruel Duke of Watkins, but she knows that his untimely death will put her at the mercy of his malicious younger brother. With help from her loyal butler, Anna smuggles away the body in the dead of night…

Anna hopes to keep her husband’s death a secret until she’s settled far from the reach of her spiteful brother-in-law. When she stumbles upon an unconscious, wounded man who bears an uncanny resemblance to the Duke, she wonders if she’s found the solution to all their problems. The stranger wakes up with no memories of his life, and Anna wastes no time convincing him of the lie…

As her husband’s doppelgänger begins to treat her like true royalty, Anna succumbs to his affections. Just when she thinks the charade is in the clear, the truth bubbles to the surface. Can Anna convince the amnesiac of her love before losing her husband a second time?

Please note: I had the cover and description updated recently, so it may seem like a new book, but it isn’t.  This has been out since 2012.  Please make sure you don’t already own it before you try to purchase it.  (I notice Barnes & Noble and Kobo still have the old cover and old description up.  I am sure those will be updated soon.)

And here is where you can find it, if you haven’t read it yet and would like to:

Now for the stuff I’m working on… 🙂

As much as I love sharing what has just been released, it’s always fun to discuss what I have in the works.

First of all, The Bride Price (Misled Mail Order Brides: Book 1) is done!

I’ve just handed it off to my editing team, so I plan to have this out in the middle of October.  I haven’t set an official date yet, but I’m aiming around the 14th or 15th.

This is Sep’s story.  People have been asking me about Sep’s story ever since I wrote Shotgun Groom (which is Joel Larson’s story).  Sep is Joel Laron’s younger brother-in-law.  Since that’s the case, I did bring back Joel Larson and his wife April and their children prominently into this story.  I couldn’t have Sep without bringing back some old characters. 🙂

Married In Haste (Marriage by Fate: Book 2) is about halfway done!

I got a new cover for this one.  I’ll be updating the cover for The Reclusive Earl, which is book 1.

This is going to be Brad Bachman’s (Earl of Youngtown) romance.  He’s Loretta’s very serious and somewhat obsessive compulsive older brother.  So far, this has been a fun book to write.  It has a lot of humorous moments.  One thing I love about Regencies is that it’s easy to throw in some humor.

I’m hoping to have this one out in the last week of December.

I don’t have a cover for this yet.  I did contact a cover artist about making one for me, though.

This is a historical western romance set in Montana.  I thought this was going to be a romantic comedy, but I’m nearing the 20,000 word mark, and while it has some funny moments, it’s not as much of a comedy as I had hoped.  I still have about 30,000 to 40,000 words to go, so it’s possible more comedy might be added to it.  I’ll have to see where the characters are leading me.  If it’s not meant to be as funny as I wanted, that’s fine.  I like to let the characters set the tone for me.

I’m happy to announce that I have started this one.  It follows Sep’s story.  This is going to be Anthony (Tony) Larson’s story.  Richard and Amanda Larson had three children.  They have two twin sons (Tony and Mark) and a daughter (Annabelle).  The twin sons are encouraged to marry two women who came to Omaha as mail order brides.  Since the man they thought they were planning to marry turned out to be a “bad apple”, they need a husband.  So I brought in both Tony and Mark Larson.  I wanted to bring in some of the Larsons, and this was the perfect way to do it.

The Rejected Groom is Tony’s romance.  I’ll say more about this book in the future.  In the meantime, I have Book 3 in the series set up.

I haven’t started this yet, but at least I know what this will be about.  This will be Mark Larson’s romance.

I’ll stop here before I make the post any longer.  I have more to share in my upcoming works, but I’ll until next month.

I hope everyone has a great September!